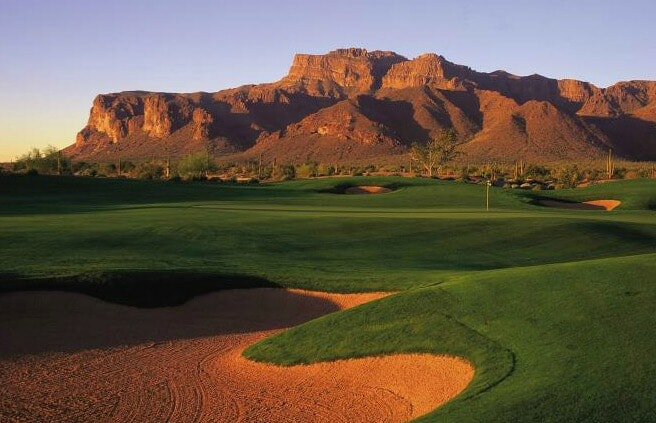 The backdrop of our golf course communities in Arizona was recently recognized as one of the 11 most beautiful hikes in the world by Architectural Digest. The magnificent mountain range offers our members and those in the Phoenix-area incredible hiking and unparalleled views of the local desert surroundings. Learn more about this Arizona landmark and top hikes that helped it make the list.

One of the best ways to truly experience the Superstition Mountains is by foot on its numerous trails. Some of its more popular day hikes include:

1. Siphon Draw Trail
Near the Lost Dutchman State Park, the Siphon Draw Trail takes hikers on a six-mile round trip through a wide canyon and up along the western ridge of the mountain. The highlight of the hike is at the top of the ridge known as Flat Iron, offering views of the rest of the mountain range, local desert and on clear days, views of Mesa, Tempe and Phoenix.

2. Hieroglyphic Trail
Beginning at the end of a residential street north of Gold Canyon, this 1.5-mile path leads up Hieroglyphic Canyon to a group of petroglyphs beside some seasonal pools.

3. Wave Cave Trail
The Wave Cave Trail treats visitors with views of the Superstition Mountains and ends inside a cave with a wave-like rock formation. The popular 3.5-mile-long hike is easy to follow and due to the uniqueness of the cave and its rock formations, the trail is heavily trafficked by guests.

Experts believe the Superstition Mountains were formed more than 18 million years ago by volcanic activity. The mountains were once part of a large caldera (a volcanic feature formed by the collapse of a volcano into itself, making it a large crater) which resurged to form a massive mountain. Millions of years of wind and rain have eroded the peaks to its present. The mountains have had various names including, “The Crooked Top Mountains,” “Thunder Mountain” and “Mountains of Foam.” Local Native Americans were described as “superstitious” about the mountain which lead farmers in the area to christen the mountains with their current name in the 1860s.