Golf bunkers is known as the rarely loved, often hated yet defining aspect of numerous golf courses around the world. As a significant feature of any golf course, general managers, superintendents and course owners eventually face the proverbial music and give these course hazards some TLC. No matter the size, a bunker renovation is no simple feat and requires a few essentials.

As the Director of Agronomy at Superstition Mountain Golf & County Club, my staff and I recently completed a massive overhaul of the bunkers on our two Nicklaus-designed golf courses. Having been with the Club since the very beginning and involved with the original course design, the recent bunker renovation was my second large-scale project with Superstition Mountain. Walk through this undertaking through the lens of our private golf courses in Arizona for a first-hand account of what to expect during a bunker renovation.

Planning
Though the project officially broke ground in May 2017, planning for the renovation began more than a year prior. The process involved countless meetings with Club ownership, the Hladky Family, to sell them on this renovation. Projected to cost $2 million, it was imperative the renovation was presented as an investment to our owners who successfully run Superstition Mountain Golf & Country Club as an efficient business.

With the green light, members of the Club staff, Phil Smith Design and the Nicklaus Group painstakingly reviewed each bunker on both courses. Having worked with the Nicklaus Group on the initial design of Superstition Mountain back in the 90’s helped streamline the evaluation process as we critically analyzed the bunkers and surrounding slopes. Our survey also identified surrounding landscape that would need to be adjusted for optimal playability and view.

Lastly, Jack Nicklaus himself reviewed each bunker blueprint and provided his approval or written feedback and recommended alterations prior to breaking ground. (Lost Gold Hole 17 revisions seen below) 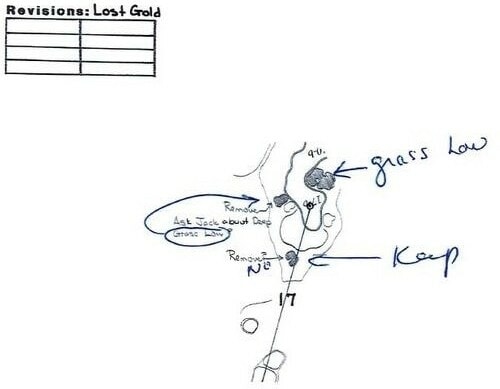 Construction
The multi-million-dollar project allowed us to renovate all 175 bunkers on our two 18-hole courses, simultaneously. Construction crews worked day in and day out to completely overhaul each bunker – removing existing sand, installing state-of-the-art Capillary Concrete, updating surrounding greens and upgrading the drainage system. While each hole required its own unique TLC, the majority of holes required the following repairs.

§ Based off evaluations, bunkers were combined or separated to

§ After 20 years of edging and play, outlines were reset to original specifications

Over the five months of construction, crews installed more than 1,440 tons of concrete and more than 4,500 tons of new sand. Despite the size of the project, Superstition Mountain Golf & Country Club was able to continue offering members 18 holes of golf every day. At times, this meant combining holes from both courses, but the project was carefully mapped to limit player disruptions as much as possible.

Challenges
No project, large or small, is completed without its fair share of challenges. From inclement weather to grass literally not being green on the other side, we overcame bumps in the process. However, our attention to detail and problem solving has left us even more confident in the integrity of the work accomplished.

Vendors
While irrigation and drainage were being repaired on the bunkers, in the heat of summer, some portions of the surrounding sod began to brown. To begin repairing the damaged areas, replacement sod was ordered, and rejected. The sod we received was as brown as what we were trying to replace! Luckily, the second shipment was in better condition and was utilized in the repairs. The agronomy team continued to monitor other surrounding greens for health and did whatever was needed to protect the high standard of quality the Club is known for.

Conclusion
The year-plus project has finally come to an end, and our Club and membership could not be happier. Our successful renovation was the result of many factors, with communication being high on the list. From ground breaking to renovation completion, we kept our staff and membership in lock-step through transparent communication which included weekly e-newsletters and a dedicated page on our website where visitors could view bunker progress. By keeping everyone in the loop, Superstition Mountain was able to reduce frustration and make membership and staff a part of this large undertaking. By renovating our bunkers, we have provided an exceptional place to play golf for years to come, signaling the health of the Club and the Hladky’s commitment to their business and the sport of golf.