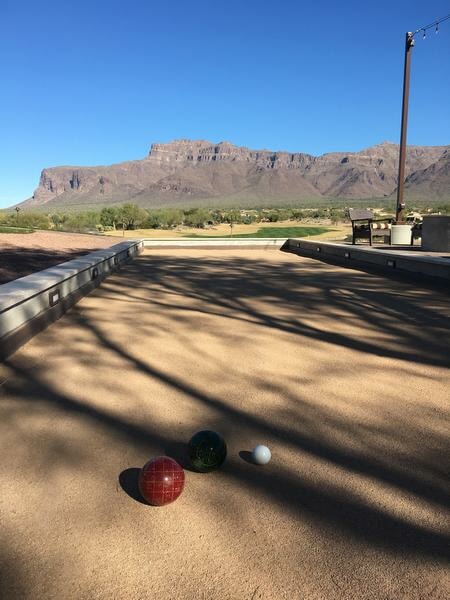 Bocce Ball or often shortened to just “bocce” is a fun and competitive game that is easy to play and enjoyable for players of any age. With brand-new bocce courts on the north side of the Clubhouse, Superstition Mountain residents and the members of our private golf course in Arizona have been enjoying our newest amenity day and night. Ready to get in the game? Check out our quick crash course on the pastime.

How to Play Bocce Ball
With two to eight players, Bocce Ball begins with one of the players tossing a small white ball otherwise known as the jack, or pallino. The jack is a target ball. The same player who tossed the jack must then toss one of the large colored bocce balls with the object of getting as close to the jack as possible. The opposing team tosses their ball, working to get closer than their opponent.

The team with the closest ball is said to be "in". The team with the farther ball is said to be "inside". The "out" team continues to toss balls until it gets a ball closer to the jack to become "in". Play proceeds until all the balls are tossed. One point is then awarded to the team for every bocce ball closer to the jack than the nearest opponent's ball. When both teams have balls equally close, no points are awarded.

A player may hit any other ball on the court to improve his position or disrupt an opponent’s position. Play continues to eleven, thirteen or another agreed upon mark, usually an odd number.

The new bocce ball courts are surrounded by expansive outdoor seating, fire pits and decorative lighting, and offering spectacular views of Superstition Mountain. With convenient service by the Clubhouse bar, plan your next day or night around this fun pastime. How Ready to put your bocce skills to the test? Join the Superstition Mountain Bocce League. We have competitions held every Wednesday and Friday evening beginning at 5pm. For more information on the bocce courts and other member services, contact the Club Concierge at 480-983-3200.