There are six different types of North American Salmon, five of which are found in the Pacific Ocean. The outlier is Atlantic Salmon which is found off the East Coast. Despite their differences, all salmon varieties live in cold water environments – usually the sea but they will head into freshwater to spawn – and they are a predatory species.

Read on to learn more about the different types of salmon and cooking tips.

King (Chinook)
At the top of the list is King Salmon. This is one of the rarest (and most expensive) types of salmon. It’s also one of the largest varieties and, boasting some of the highest levels of fatty acids which results in a deliciously rich flavor. The hearty nature of this fish lends itself to grilling and pan roasting. Like a good steak, be sure to bring your salmon meat to room temperature before cooking.

Sockeye (Red)
Sporting bold red flesh, Sockeye Salmon are a smaller and much leaner than their King cousins. This salmon will have a more distinct “fishy” flavor and is often used for lox and in high-end salmon burgers. The fillets can be grilled or pan-roasted - skin side down for the best results.

Coho (Silver)
Coho Salmon is a medium-sized fish with a more subtle, delicate flavor. This type of salmon is great for cooking whole – just stuff with your favorite herbs and throw on the grill or roast in the oven.

Pink (Humpback)
Pink salmon is low in fat with a delicate pink flesh and mild flavor. A small fish, usually between two and six pounds, this variety of salmon is most commonly found in a can. But don’t knock it until you try it – check out this recipe for tasty salmon croquettes with a fresh dill sauce.

Chum (Dog/Keta/Silverbrite)
One of the least expensive and most unpopular varieties, Chum Salmon was often used to feed sled dogs and has earned an unfair reputation as “dog” salmon. That said, in the past few years Chum has been enjoying a resurgence. It’s relatively affordable and has a mild flavor that is lower in fat but still packs a similar nutritional punch as King Salmon.

Chum is actually most valued for its row and, in fact, a majority of Ikura sushi comes from this variety of salmon.

Atlantic
An endangered species, all commercial Atlantic Salmon is farm-raised. This fish has a mild flavor, is widely available and a more affordable option than King Salmon. 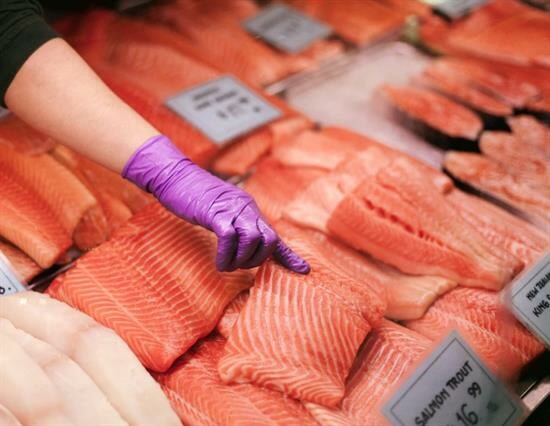 When picking a piece of salmon from the store, look for moist flesh and skin. Avoid pieces that have brown spots and flesh that start to gap a little or pull apart in places. Alternatively, you can head over to the clubhouse and let the talented culinary team at Superstition Mountain Golf and Country Club handle the selection and preparation for you.